I generally dislike interpretation, which is one of the techniques used in solo play. It generally takes me out of immersion so I try to avoid or minimize it as much as possible. That means I’m potentially missing out on one of the usual techniques for playing solo, though, so I’m taking on the challenge of trying to solve that problem for myself.

These are rules I playtested recently. There isn’t much to them, IMO, but their aim is to try and make interpretation fun for me.

Included after the rules is the aborted play test of those rules. I decided to stop once I became bored, but there were times when I was definitely hooked— mostly when danger was hanging over the “protagonist’s” head.

I did not trigger the game end rule before quitting. There isn't really that much of a story either (something I'm thinking about in my post-mortem).

I'm sharing mostly just to share, but would also be appreciative of any experiences you've had in making the act of interpretation fun for yourself. 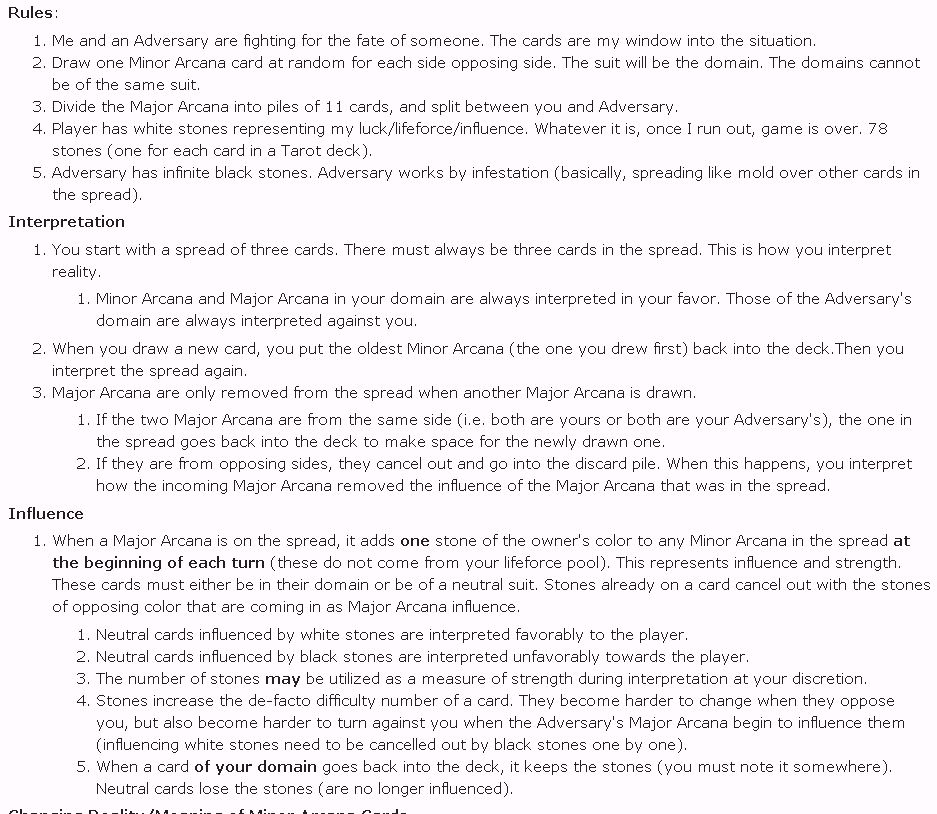 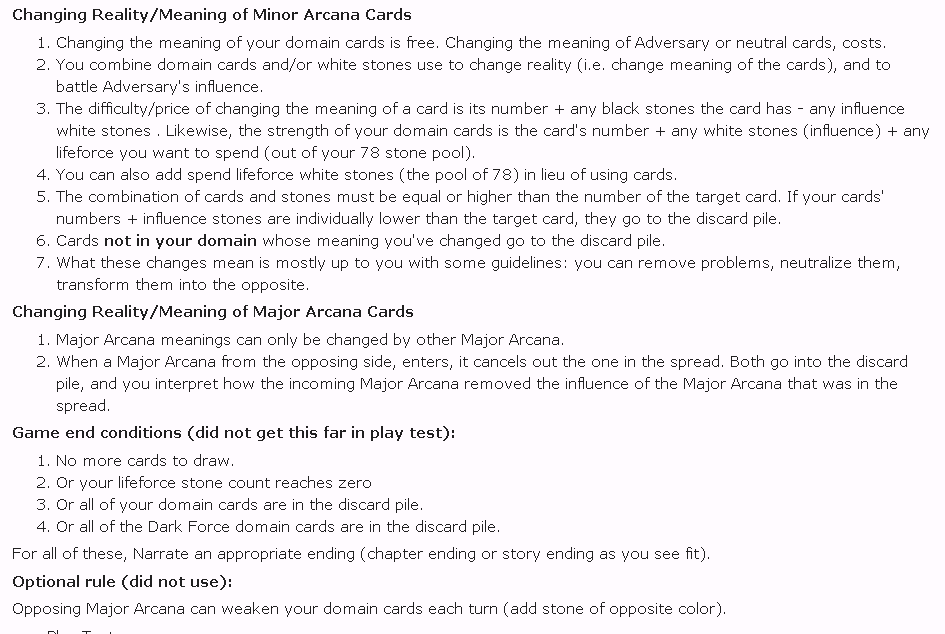 What is our domain? I got 7 of swords. Dark Force got the Queen of Pentacles.

Interpretation: Dealing with someone who might have be thinking of deluding someone (7 of swords). There appears to be something related to financial security (Queen of Pentacles); they might be in a tight spot. The target might be someone dangerous (The Devil); or perhaps it's their own excess and materialism (the Devil) that is feeding the financial troubles (The Devil is in the domain of the Dark Force and it grows the cards in its domain by adding stones. I"m playing with infinite stones to get a feel of how many it would take to deal with everything.)

Difficulty to remove the Queen of Pentacles is 13 + 1 stone; can't remove The Devil (Major Arcana).

If I burn the 7 of Swords and I spend 7 stones to remove the Queen of Pentacles, I'm still left with the fact that they're trying to scheme against someone dangerous.

I can change the meaning of 7 of Swords so that they're not scheming anymore. It's less interesting story wise, but it makes sense if I want to "win". This change is free because the card suit is in my domain.

Layout: 5 of Swords, The Devil, Queen of Pentacles

It seems like this person's ambition might drive them to steamroll someone and burn some bridges. There is still also the dangerous Devil still there as a potential threat that maybe they don't know about. There is also the financial aspect.

I'm going to burn the 5 of swords and spend the 10 stones to get rid of the financial problem. This means that they steamroll someone and burn those bridges (I did not change the meaning of the card). This might have been what got them out of the financial issues.

Both cards go to the discard pile. I now have 68 stones.

It's starting to come together now that this person is into some dangerous line of business or maybe owes money to that dangerous person.

I shift reality and now this person is financially OK but they burned some bridges.

Because The Devil arcana is in the spread, it adds one stone to the ace of wands and 4 of wands, in addition to making the meaning go against me. n.

Otherwise, it would be a neutral card and any interpretation would have been as literal as possible in intent.

Ace of Wands looks like the beginning of something, but given the black stone it's not good. It's not clear enough right now what it might be, so I'll leave that part at that.

The 4 of Wands should have been something about harmonious relationships in the family. Instead, it might mean that this person's family turned their backs on them or against them. No harmony at home.

4 of Wands must make space for the 3 of Pentacles (being the oldest non-major Arcana card). NOte down that 4 of wands has one stone. Reshuffle into deck. Added another stone to the ace of wands. One stone to the three of pentacles.

It seems obvious now that someone was inspired (ace of wands) to do harm against our protagonist. Probably the person that they burned. They have gotten a team together to burn protagonist back. Heck, it's probably teamed up with the Devil.

Remove the 3 of pentacles to change that reality. There's no collaboration. The inspiration/desire and the Devil remains, and whoever's inspiration it is, it's not in our favor.

Some clear mindedness or perceptiveness. Perhaps our person is begining to realize the things that are threatening them.

Spend the 4 points to get rid of the ace of wands. The inspiration is squashed by my shift. Nothing the protagonist did.

Now I have 60 white stones.

8 of swords. Layout: Queen of Swords, The Devil, 8 of Swords. The Devil Can't influence your domain so no black stones added to those.

Queen of Swords suggest that our protagonist is becoming perceptive anc clear minded. Perhaps of his problems? Eight of Swords suggests that the nature of his trouble has him trapped (I guess I just unconsciously decided it's a 'he'). But, because Swords is my domain, I'm going to change that meaning to the opposite: He sees a way out of his trouble.

The Emperor. That is one of my Major Arcana, so it cancels out with The Devil, effectively removing that problem (at least for now). Both go to the discard pile.

How that happens is determined by the interpretation. I'm going to go with the simple keyword of "authority" from the Emperor and say that law enforcement is causing trouble for this enemy, and he has to forget about our protagonist for now. Maybe this problem will come back later when the discard pile is shuffled into the deck again.

The Hierophant and the 8 of Cups (two slots available). Layout: Queen of Swords, 8 of Cups, THe Hierophant

Add one white stone to the Queen of Swords and 8 of Cups. This is the new temporary strength of the cards: 14 for Queen of Swords, +1 white for the 8 of Cups (bonus for you, penalty for Dark Force).

Our hero perhaps is becoming wiser due to the looking at his situation with a clear mind (Queen of Swords). He has decided to leave behind his ways (8 of Cups). He seems to have the determination not to stray from this new path (The Hierophant)

Ace of Cups. Layout, Ace of Cups, 8 of cups, The Hierophant

Choose which card you will reshuffle. Queen of swords (she will keep the +1 stone).

Add one stone to 8 of cups.

Our guy is still walking in his new path, and has found some emotional fulfillment to boot. Maybe he's met a romantic interest or maybe he's found a more fulfilling way of making a living. I can't see who or what.